Report back by Eileen Cruise

The Nationals is well behind us and is fast fading into my memory banks as a very pleasant trip with lots of stops and starts on the way there and back; and great weather on the Highveld which made it all the more enjoyable. Ready to depart 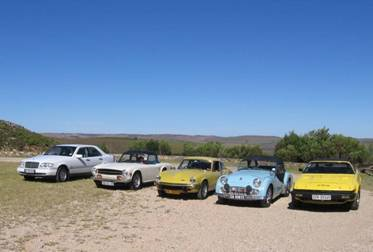 Maselspoort was a lovely venue for our event and we filled all the accommodations which meant we had the whole place to ourselves. Some late bookers stayed in a nearby hotel and the locals joined us on camp for the all the on camp events. 5 cars travelled together via the scenic route 62 which was lovely for me 'cos we seldom go off the beaten track when we travel upcountry Gerhard and Suzette Vorster in the TR8, Brian and Sheila Maggs in the TR3A, Dennis Cook and Josephine Chan in his TR6, Tim and I in the GT6 and Jan and Miems Booysen in their plastic. . We stayed at De Rust the first night where Gordon and Denise Waring joined us for the night. Denise had organised great accommodations for us and we had a leisurely catch up braai together. We all enjoyed a scrumptious breakfast at a quaint restaurant cum gift shop and then said goodbye to the Warings who had to get back to attend their farm. The next night we stayed at Aliwal North and then hit the road quite early for the last leg to Bloem. 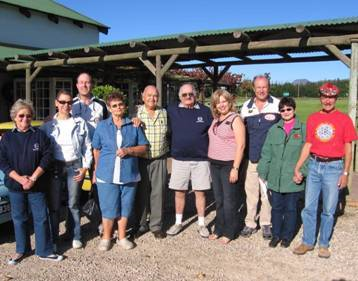 We took almost 3 days to get there in a most leisurely fashion (read lots of time for breakdowns) and got to Maselspoort mid afternoon feeling glad to have arrived safely and in one piece. Gerhard had towed Brian the last 250 kilometres as the engine had blown on an uphill climb. The guys descended on it the next day like flies to get it all sorted and parts arrived from Jo'burg via a club member. Unfortunately it was too big a job to be fixed in time for concours, but the work continued after that and an electrical fault was sorted out most efficiently by a female auto electrician from Jo'burg club. The guys just stood around and admired her work. She was totally amazing and worked until almost dark that night.

On the first night there we had our own club welcome braai outside the Vorsters chalet. The 4 Sanderson's joined us, having arrived in their plastic soon after we did. The air was clear and not too cold and we had a most pleasant evening together. The next day we enjoyed a delicious welcome breakfast in the camp hall after which it was car cleaning day for everyone. Several folk opted to drive into town where Dave Blair had organised for a place to be open that steam cleans engines and undercarriages. I'm sure that took a lot of the backache out of the job. That night we opted for the stargazing tour at the Observatory next door to the camp. We made the mistake of trying to take a shortcut through the open ground to save walking up to the road and found ourselves up against a very steep climb over loose shale and stones with a high security fence at the top of the hill for all our efforts. Coming downhill fast to beat the dusk, several of those who followed us dumb Cruises found they had uncomfortable close contact with cacti. Undaunted we steamed up the hill the long way round and arrived in time for the end of the first section of the talk which was staged on top of the roof on stone seating. What a sight the stars were. The clear air around Bloemfontein makes for a magnificent view unaffected by the light pollution one experiences nearer to densely populated towns. Indoors we had a chance to look through two of the huge telescopes at Saturn. The ring was clearly visible. It was amazing to gaze at this far away planet. There was also a very informative media presentation with a Q & A session afterwards. The evening was very well supported by the whole Triumph club. 72 people went up to the Sterrewag, including several young children.

Concours at the Windmill Casino the next day was a sight to see in the bright sunshine. What a spectacle to survey and appreciate all the hard work the guys and gals had put into polishing and cleaning their respective cars. I had opted not to enter concours this time and merely drove my car to a hand car wash facility on the Sunday. A very practical solution that saved my back and gave Tim the whole day free to help out on Brian's car. Sheila had a nice win in the casino on the 10c slot machines. I quipped to her that it should cover the repairs to the TR3 : 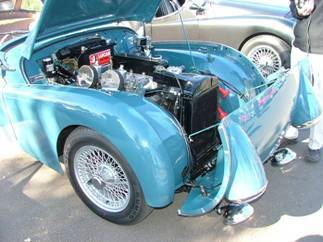 The scenic tour de Bloem was a lovely relaxed day out for us. We were on our own the whole day as everyone left at intervals. We spent almost 2 hours at the first stop, The Oliewenhuis Art Museum which was built in 1941 and was the residence of the Governor General of the Union of SA. It is a beautiful house with several art collections and museum pieces. Outside there were superb sculptures, including a herd of sheep! and a merry-go-round with 16 different African animals as the rides looking so funny and welcoming. There was a lovely bandstand in the gardens and it looks like it would be a nice venue for weddings and fund-raisers. We had cake and coffee in the outdoor restaurant and took our time enjoying the ambience.

Onto the Armour museum where Tim had a field day strolling round the whole camp, while I found a comfortable spot and read my book after doing a brief tour of the old hospital. So, another couple of hours later we found ourselves in the Pretty Gardens which is a veritable treasure trove of plants, décor shops and eateries, beautifully laid out. We enjoyed our lunch stop there and found all the clues we needed for the quiz we were doing. We had to skip the last two stops as we needed to buy motor spares for two cars and had to find a Midas. So we missed out the Womens Memorial and the Fire Engine Museum and lost out on points, but we really enjoyed our day and didn't mind at all. 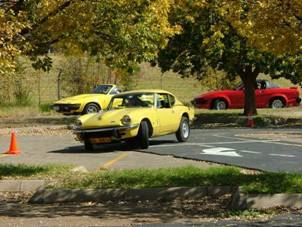 That night was the burger and quiz night which was sponsored by TATA and part of the quiz was to feel car parts inside cloth bags and guess what they were. This was a timed process and the bags were being passed around among the most experienced of the club members and proved to be quite hilarious to say the least. We didn't do so well in that section but we came first in the Q & A section :)

The next day was the BGM, and that afternoon was the Driving Skills Test which was great fun and I managed to get quite good times on the two circuits. Tim and Alan Grant showed off a bit with their superior racing driving skills. There were a lot more ladies taking part this time round and we were blessed with good weather and a few hair-raising moments with some chaps collecting several cones under their cars as they tried to better the times of the previous drivers! 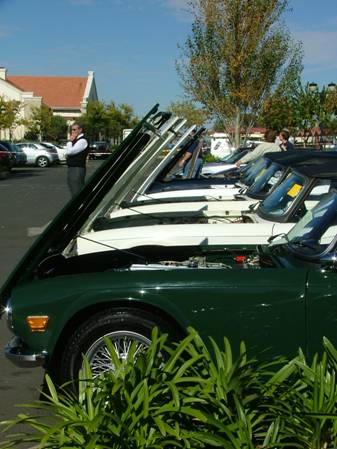 At the Awards Dinner that night Cape Town Club got several awards, including a well deserved silver medal for Dennis Cooks TR6 at the concours. Dennis was also awarded the Ian Evans award for outstanding service to the Triumph club.

Needless to say we didn't score top marks for the whole National event, but Gerhard tells me we did come in second. I personally won the Best Female Driver trophy. :) which is nice 'cos this year it's an actual mounted trophy. At last I have a trophy of my own to display. Tim already has a cabinet full of cups etc from his kart racing days. On the way back we stopped over at Beaufort West at the Wagon Wheel motel which is quite comfortable for the price and serves really delicious meals. I had Karoo lamb chops for my supper and they cooked them to order perfectly. We set off again at 6am the next day, only to have one of our group break down before we got to the breakfast stop at Matjiesfonten. We finally got there well after ten but were in luck as breakfast is served at the Lord Milner Hotel until 11am, though they were out of bacon by the time we got to the buffet. It was real country cooking and there was a table with over two dozen different jams and marmalades and other fruit preserves that was too tempting for words. We still managed to have a thoroughly good breakfast/brunch. It was well worth the wait :) We took several photos in that auspicious hotel as well as a few outside on the street where a London bus was parked up along with several other antique vehicles.

What more can I tell you? I shall never forget our forage into the stark interior along Route 62 through the great Karoo and back again. All the more enjoyable because we had like-minded companions with us for company, enjoying our classic sports cars as only we mad things know how. I'm very proud of my own little GT 'cos she's the only car from our club that didn't break down; even the plastic, a Mercedes, had a turn : Till next time, Eileen